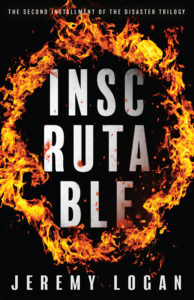 Something stinks in Bay City. Cajun gypsies who run a drug and sex slave ring team up with the son of a wealthy politician to strike it rich in central Michigan. When a bumbling Drug Enforcement Administration office accidentally gets wind of the illicit operation, the rich kid devises a plan to silence the DEA agent by blowing up the gas transmission line crosses his front yard. The agent dies, but it attracts an investigation team that’s a nightmare for conspirators.

Part Two of Jeremy Logan’s Disaster Trilogy, Inscrutable continues the exploits of Daneli Crisis Management (DCM), a disaster response firm. Part One featured incident investigator Victor Majeski as the lead. In this sequel, his role can be described as Supporting Actor. He is teamed with Ericka Hunter, an Afro-American woman with claims settlement expertise. Together they can smell a conspiracy like no one else.

DCM is hired by Bay Oil Co to respond to the transmission line disaster and assist it in addressing claims from its “fracking-type” gas extraction program in the central part of the state.

Kyle Wissenhunt, the rich kid, uses his father’s huge land holdings and leases on other large estates to hide his illicit activities. He thinks he’s outsmarted law enforcement, and doesn’t realize his criminal empire is in jeopardy of being exposed.

The title, INSCRUTABLE, refers to the mastermind behind Kyle’s illegal activities, his hidden and secretive partner. The front for the drug and sex slave operation is Kyle’s lease of large tracts of undeveloped land in Central Michigan. He turns them into hunting preserves where hunters find baited fields attracting all sorts of game. The tracts of land are so vast, in the thousands of acres, that he can easily hide the methamphetamine factories without detection. Kyles’s plantation includes an airstrip where the exchange of captured girls from south of the border are auctioned and sold.

The dark side of the conspiracy is suspected when contamination and disease from gas exploration was faked by landowners paid by Kyle to shake Vic and Erica off the trail. But when Bay Oil’s search for additional extraction sites comes close to a methamphetamine production operation, the conflict gets ugly. Vic and Erica become targets for elimination, but they’re far enough ahead of the conspirators to elude their pursuers.

Everything seems to come to a head at the same time when the reader discovers that Kyle is too stupid to be the mastermind, but when the Feds descend upon his family plantation estate, they discover Kyle, his partner and his plane have vanished. Daneli settles the rest of the claims against Bay Oil and heads home to Atlanta. A few days later the FBI reports that Kyle, his pilot and henchman, were found dead when their plane crashed in Michigan’s Upper Peninsula. That’s not the end of mystery. Someone murdered them and absconded with their illegally gained loot.

Law enforcement is stumped, but Vic and Erica aren’t. The only question that remains is; how are they going to get the mastermind to make a mistake.